Home
Dating Over 40
Finding a Loving Partner Late In Life 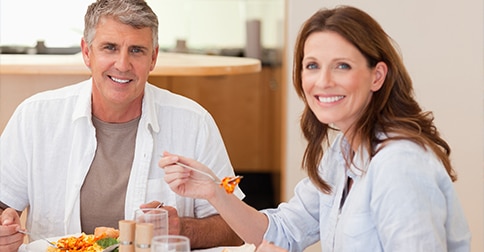 At 60, Marge didn’t think that she would ever find a man who she thought was “The One.” Sure, she’s had a few romances over the course of her lifetime, but none of whom she wanted to settle down with and get married to.

That is until she met Carl, who she met online. The two chatted for a few weeks and discovered that they lived relatively close to one another, so they decided to meet up at the upcoming county fair. It has been bliss ever since and has been married for 3 years.

Contrary to what you might think, love and/or lust isn’t just something that the younger generations can experience. A lot of people find their “The One” later in life, sometimes as late as their 60s or even older.
According to statistics, the chances of getting married later in life are increasing as time wears on. In 2003, the Survey of Income and Program Participation (SIPP) revealed in their report that 13% of folks who got married that year were 45 years old and up. Newsweek even took back their claim that women who were over 40 were more likely to get killed by a terrorist (!!) than getting married. How’s that for a kick in the gut ladies?
What people seem to not realize is that love can come into your life when you aren’t even looking for it. Don’t believe us? Keep reading…

Being a Risk Taker

Harriet, 53, always lived a cautious life and dated men who were “safe.” That was until she met Frank through a friend. Frank lived life in the fast lane. He had a motorcycle, he hiked, he liked to try new and unique cuisine… He was a breath of fresh air for Harriet. Frank showed her that there was so much more to life than what she was experiencing. The pair has been dating for several years and enjoying every moment of it.

As you age, naturally, you become settled in your ways. Claire, 48, had a routine where she would go for a morning jog before she went to work. When she started dating her now fiancé, Stephen, she had a hard time adjusting to him being around all the time. While she enjoyed his company, she couldn’t wait until he left. She wanted her privacy and space back. However, as time progressed, she found that when he wasn’t around, she missed him dearly, and that is when she knew she was in love.

When you fall in love later in life, you sometimes you have the fortune of meeting someone who already has a child (or several) and maybe even a few grandchildren. This ready-made family is exactly what Jacob, 54, got when he met Sarah at the dog park. Sarah had previously been married and had two children who were almost ready to go off to college. When the two met, it took a while for Sarah’s children to warm up to the idea of their mother dating, but after spending some time with Jacob, they got along famously and now they are one big, happy, blended family.